Birds seen in the wood

As part of our conservation activities we are organising regular surveys of different types of wildlife in the wood. In this way we will be able to keep better track of the impact of our work in encouraging wildlife and diversity.

We have engaged different specialists to help us with this and Mike Doughty-Lee is conducting bird surveys for us. He has already completed surveys in February and March this year and identified the presence of a number of species.

Birds present in smaller numbers were Bullfinch, Mistle Thrush, Buzzard, Marsh Tit, Chaffinch, Green Woodpecker and Long-tailed Tit. There were also winter visits from Siskin and Redpoll and Mike commented that the odd pair of Redpoll might stay on to breed.

He was surprised not to see any Woodcock though as it is a good year for them but he suspects that this is because there is not much undisturbed habitat in the wood and they have been put off by disturbance from dogs roaming off the lead. (Please don’t let your dog do this just now, in the nesting season.)

Mike starts his Breeding Bird Surveys for us in April and hopes to spot some summer migrant visitors later.

Improve your own Bird Spotting

Do you know about the BBC web site “Tweet of the Day”? It is a collection of pictures, songs and calls of 250 British birds together with a commentary about each bird. Just go to: http://www.bbc.co.uk/programmes/b01s6xyk and you too may be able to spot all the birds that Mike has identified in the wood.

We have in the past repeatedly asked dog owners to clean up after their pet but the level of complaints to us about dog fouling is actually increasing. There is growing public concern about this issue, which is leading to more drastic measures being taken against offenders. Rugby Borough Council recently successfully prosecuted a resident who did not pick up after their dog. The man was ordered by the court to pay £575 as a result of the offence.

Why is it that a few thoughtless folk are spoiling our beautiful woodland?

We know that most of you are responsible dog owners who enjoy walking your pets in the woods and carefully pick up after them. Sadly, a few people are allowing their dogs to foul paths where woodland users, including young children, would like to walk. This is not only unsightly, dirty and smelly but it is also dangerous. The faeces are swarming in bacteria that can cause blindness in children.

We need to stop this now and need your help.

This is also a problem in Binley Woods village. Together, we are trying to find a local solution and Rugby Council is also launching a high-profile poster campaign asking for the public’s help to catch the culprits. They have an app for mobile phone or tablet which enables you to report dog fouling online.

Our Dog Warden can issue fixed penalty fines of £80 but she needs to catch the perpetrators first. We have tried displaying posters and now we are offering ‘poo bags’ to dog owners entering the wood and talking to visitors about the problem. Unfortunately, there aren’t enough of us to be there all day, every day.

If you think you could help with this campaign or have any bright ideas for dealing with this problem, please contact one of the Trustees or come to our AGM when we will be discussing it

Last winter’s exceptional weather presented some problems and some surprises. For example, despite plenty of rain and wind, there were relatively few wind thrown trees, and the work party sessions went on as normal.

The thinning contractors, who expected to have completed their work in six weeks, went way over time for a number of reasons. The project extended
into the rainy period and operations became hampered by mud; so much so, that they had to stop well before the job was finished.

We are looking into reducing our dependence on contractors next winter by doing more ourselves, which will add to our workload. However, this will enable us to be more flexible, and work when ground conditions are more favourable.

General tree health throughout the wood is good, and by continued thinning we intend to keep it that way.

We have taken advantage of the soaking ground to light fires safely, in order to dispose of piles of brash effectively.

To the north of the wood we had a tree which fell, obstructing a parking area, and a number of other trees were taken down to guard against risks of damage to property.

As part of the Great British Elm Experiment, we have been given an Elm (Ulmus Minor) which is from Dutch Elm Disease resistant stock. This is part of a nationwide attempt to help elm re-establish itself. It will be registered and monitored, and may reach its potential of 30 metres height! 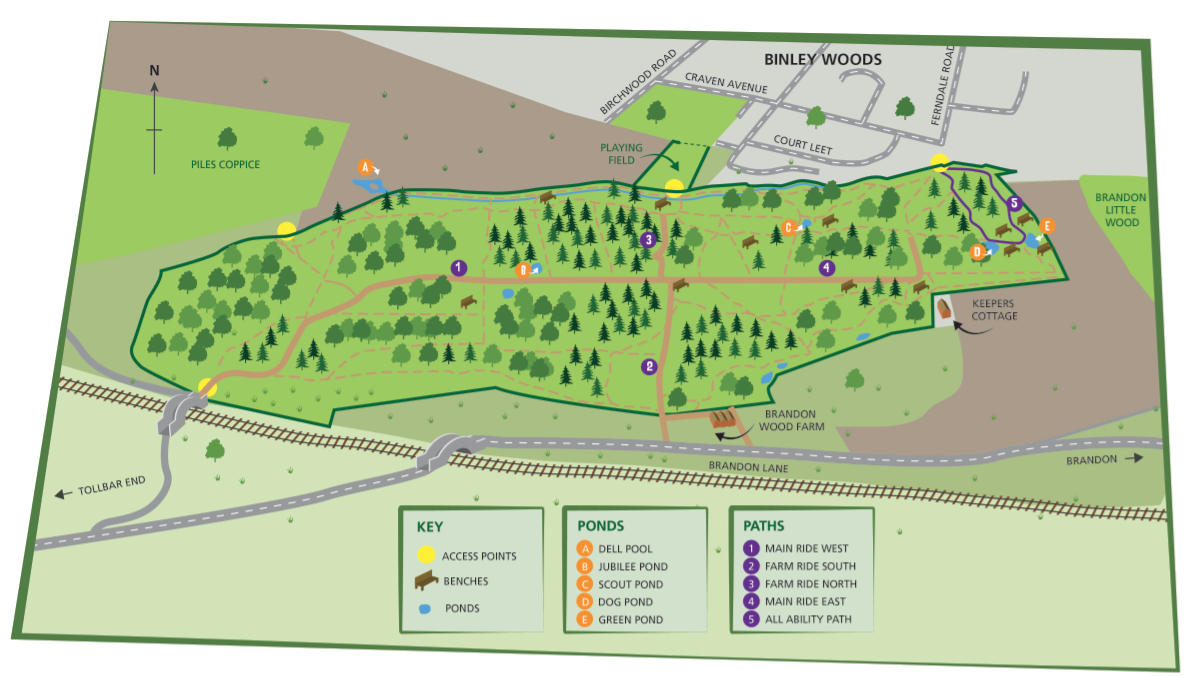